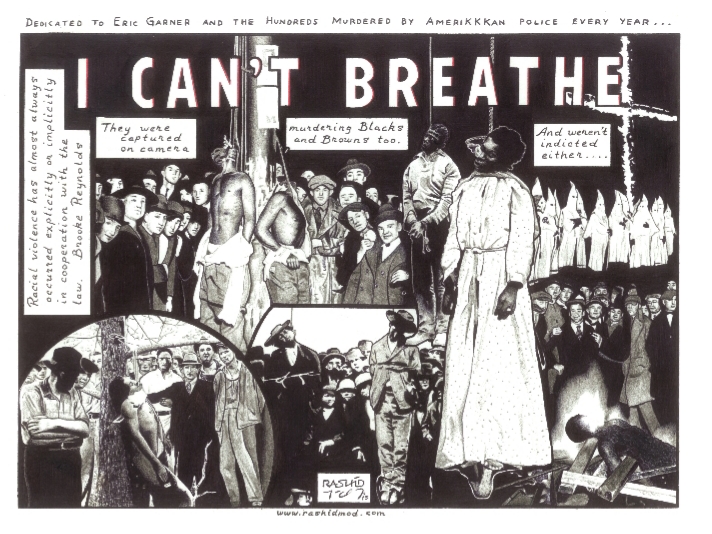 On May 24, 2020, a crowd of onlookers witnessed the slow death by asphyxiation of a handcuffed Black man in Minneapolis. This was a public lynching.

Only, unlike in times past, this crowd didn’t cheer but instead pleaded over and over for the cop who murdered George Floyd, to let him breathe; to take his knee off his neck and let him up. Several times onlookers tried to physically intervene, only to be themselves threatened with pig violence.

Also, unlike days of old, this murder was filmed for the world to also witness. And Minneapolis exploded! Thousands poured into the streets in protest.

Until just a few years ago, the world and Amerika at large denied that Black and Brown people in Amerika were routinely murdered by the cops.

The advent of cellphone technology and social media enabled everyday people to force a world in denial to bear witness to the reality of our lives under racist imperialist occupation.

Proportionally, more of us are murdered today by cops than were killed by lynch mobs during the Jim Crow era. And just like during Jim Crow, our killers are protected by a system that closes ranks to villainize the victims and portray our abusers as well-intended arbiters of justice. They’ve even crafted language to recast these killings as benign and something other than murder. Instead of calling it what it is, they’ve coined the euphemism, “police-involved shootings.”

What they are is a continuation of lynching. The cops have always participated in this sort of violence. They’ve never been a source of service or protection in our communities.

Black and brown people have always been corralled into marginalized spaces of Amerikan society where we’ve lived a suffocated existence. We were suffocated to death by everyday Amerikans at the instigation and participation of their elites, political leaders, and often the cops when we were hung from trees.

The lynching by suffocation of George Floyd, like that of Eric Garner in 2014, as they protested over and over “I can’t breathe!”, is but a continuation of the same in a racist capitalist society that must be fundamentally overturned. We’ll never be able to breathe free until it is!

Dare to Struggle Dare to Win!

All Power to the People!