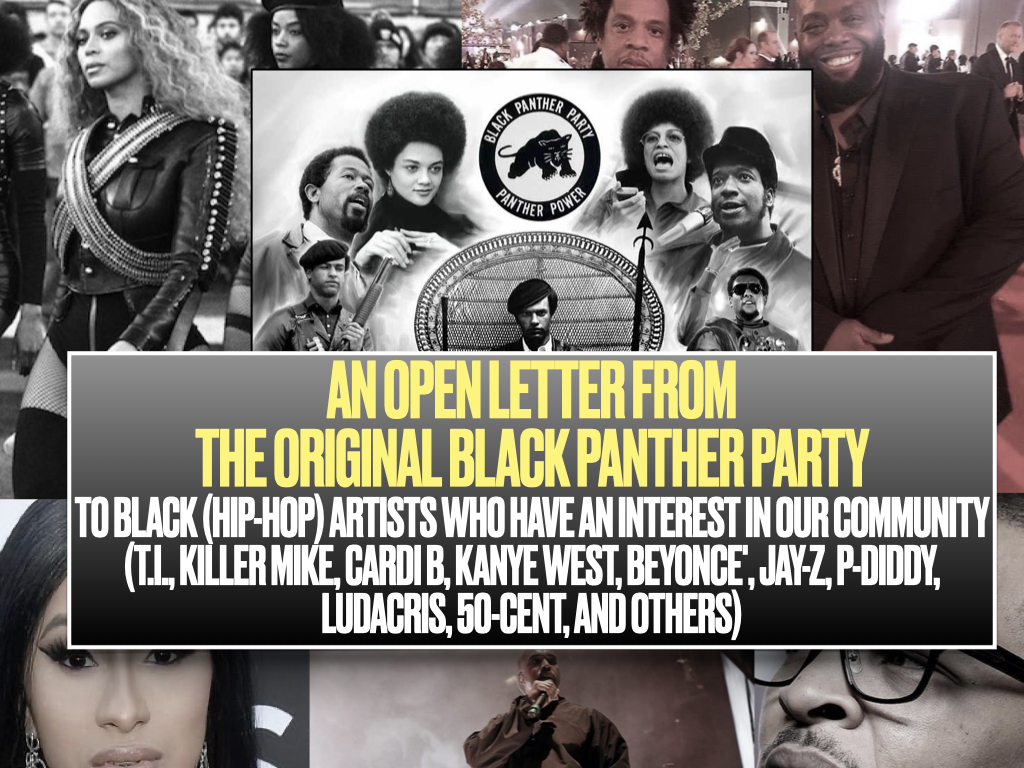 Greetings and Solidarity to each of you.  In recognition of your individual voice, influence, and cultural following among current generations of Black people/Africans in the Diaspora and on the continent, we salute you.

While we only know you from the public domain, we know that many of you come from backgrounds where you faced poverty, police brutality, lack of healthcare and other forms of oppression like most Black people. We all recognize that we are in a watershed period of economic and government failure, a pandemic and now a resistance movement from which things will never emerge the same.

What we all do in this period will directly impact the fortunes, survival and freedom dreams of Black People, and others around the world who suffer from the same oppression. Whether its South American Favelas, South African Shanty Towns, Palestinian territories or the Black urban ghettoes of racist America, capitalism and white supremacy has turned the entire world into a ghetto for the profits of a few. So, we should pay attention to each other, because here, in the heart of racist America we are all we have, and along with our true allies, are truly all we need.

Individually we who write this letter are former members of the original Black Panther Party, co-founded in 1966 by the late Huey P. Newton, and Bobby Seale in Oakland, California. We were targets of the FBI’s infamous Counter Intelligence Program (codename COINTELPRO) which killed many of our comrades, including Fred Hampton, Mark Clark, and numerous other Panthers and revolutionary freedom fighters. We are veterans of government search and destroy missions that forced our beloved Comrade Assata Shakur into exile.  We are former Black Political Prisoners who spent decades in U.S. prisons, like our comrades Russell Maroon Shoatz, Romaine “Chip” Fitzgerald, Sundiata Acoli, Jalil Muntaqim, and Mumia Abdul-Jamal who are still locked down today. In short, we were on the front line of government efforts to kill and destroy the Black radical movements for civil/human rights including the right to self-determination.

Some of us were also racist law enforcement’s worst nightmare, armed combatants in the revolutionary Black underground, the Black Liberation Army (BLA).  Much of our history in our people’s struggle has been kept away from you and seemingly unavailable to your generation as you reinvent what was done in the past.  Our people’s enemies haven’t changed, circumstances and conditions have. History never repeats itself – but it damn sure can rhyme.

The question is where do we, Black people, oppressed peoples, go from here? What is to be done? Make no mistake, we are still at war. A war that began when, as Malcolm said, “Plymouth Rock landed on us” and it has continued to this day unabated.

It is our duty as revolutionary freedom fighters to pass on lessons, wisdom, knowledge and experiences to the next generation of freedom fighters, cultural workers and activists.  In that manner, an oppressed people can resist domination from one generation to the next without reinventing failures, pitfalls, or the mistakes of the previous generation. It is our enemy’s job to prevent this, and isolate one generation from the other. It is their duty to denigrate the history of militant and radical traditions and burnish the history of integrationist who think we can simply vote our way out of this problem.  It is for this reason that we have stepped forward at this neo-fascist moment in history driven by the current crisis of capitalist culture, an ongoing pandemic and the now renewed attention and massive demonstrations brought on by ongoing police murders in our community.

We have chosen to focus this letter on you because our enemies constantly target you to help “calm” the people down. They hope your new class status will outweigh your racial and class analysis. You have a chance to prove them wrong and with your resources and influence you can be crucial to the collective survival of our people. Tattoos, expensive cars and private jets don’t inoculate anyone from a disease and don’t render you bullet proof. We have to collectively provide for our own human agency and not delude ourselves into thinking it’s safer to integrate into a maligned system of greed and dehumanization.

Some may say we as Panther veterans are not the Black people you should be seen talking to. Niggas should know their place we’ve been told and this is one reason that powerless Black folks have sports figures, actors, musicians and bought-off politicians as their public opinion makers. The voices of the disenfranchised is only heard when they rage against the machine that has ground down their lives.

We have all been encouraged by the energy of the Black masses and our allies in protesting the murder of George Floyd, but as each of you are well aware the murder and brutality visited upon our people is nothing aberrational or new. The butchering, torture, and dehumanization of Black people extends back to the days of bullwhips, castrations and mass rape on the plantations of America’s European “founding fathers” and continues to this day. This is the legacy from which modern law enforcement in America derived its overarching purpose, the protection of property and wealth, not people — especially not Black people. No amount of training, social sensitivity, counseling, or smaller police forces will change the current impact of this history on law enforcement. Only our control of public safety in our communities will break this historical context for modern law enforcement. This begins with decentralization of the police, and community control of public safety.

This season of political struggle is indeed about the “Ballot and the Bullet.” To organize the former, (ballot) all progressive and radical forces in America need to come together in a United Front Against Fascism and the militarized police state. This is what the BPP did at the height of the tumultuous sixties, resulting in delaying the outright consolidation of right-wing racist takeover of American foreign and domestic policy.

We must also look beyond solutions that are strictly based on legislative reform, voting, or individual capitalist enterprises. Black folks must survive institutional racist paradigms of power and exercise political and social self-determinant power. The public platforms each of you have can go a long way in creating this tactical and strategic organizing vision. With this in mind we ask you who have a certain sway over the attitudes and minds of today’s Black youth to do the following.

These are just some of the things you/we can do to create a united Black Liberation Front to challenge our oppressive conditions in the united states and erase the class divide between the overwhelming majority of our people and those few like you who have some wealth and influence. This is all our opportunity to do what’s best for our people and be on the right side of history.

9 thoughts on “An Open Letter from Original Black Panther Party Members to Black (Hip-Hop) Artists Who Have an Interest in Our Community (T.I., KILLER MIKE, CARDI B, KANYE WEST, BEYONCE’, JAY-Z, P-DIDDY, LUDACRIS, 50-CENT, and others)”