Birth of a Dream Weaver: A Writer’s Awakening.

LEAVE IT TO A continental African to ironically describe his idyllic university days in the context of the blood and betrayal of the most barbaric of European colonialism and the power and promise of African independence movements. When that writer is the acclaimed novelist and playwright Ngugi Wa Thiong’o, the story increases in power because the reader knows his future: arrest, imprisonment, exile. His future crime? Using words in Kenya—creating plays that analyze post-revolution African society and pierce its contradictions. But that is work for vol. 4, if, Ogun willing, it will emerge one day. Thiong’o, now 83, is now within the success of his current novel. Volume 3 of his memoir series, a story of his days at Makerere University in Uganda—“I entered Makerere in 1959, a colonial subject, and left in 1964, a citizen of an independent Kenya”—is a late 2020 reissue of the 2016 release (which this writer, searching for it, missed; this review is an attempt to make amends for that oversight. Please read this reviewers’ impressions of the first two volumes here). But, as a diversion of sorts, he transforms the seemingly mundane into significance through context and tension both internal and external. “Colony and crown, prison and palace, they produced each other,” he remembers, channeling one of his professors grappling with Charles Dickens. “Being born and educated in a colony inevitability leaves scars,” he writes. “But anti-colonial resistance is also part of my heritage.”

Because Makerere, a colonial structure in all ways, is so near the Kenyan border, the spectre of Kenya’s Mau-Mau movement—since Thiong’o, consistently, leaves no linguistic colonialism unchallenged or uncorrected here, it is correctly labeled the Land and Freedom Army—circles James Ngugi’s early classroom days like Dementors around Hogwarts. The cultural battle lines were always clear: “The colonial state sided with the literary,” the racist, self-referring pseudoscience about Africans, detailed the author, “but the oral was the voice of the people, and even after the state banned FLA [sic] songs and poetry, song and dance inspired defiance in those herded in barbed-wire trucks into concentration camps.” Like James Baldwin using Bessie Smith recordings to retrieve the language of his youth for his first novel Go Tell It on the Mountain, Thiong’o would use his peoples’ songs as a map to find himself as a chronicler.

He is not yet, so James, in his heart still the British colonial subject, does not battle school authorities when his one-act play, The Wound in the Heart, is banned because the writer details his lived-in experiences with British savagery. A well-dressed English gentleman of a sort—“every student was dressed (at Makerere) as if ready for a cocktail party at a moment’s notice”—he is too busy working to stay in school and learning, experimenting with newspaper and magazine journalism and novels and plays and finding the beginning levels of literary success. He introduces and identifies how his teachers, classmates and friends—white (British and American “invaders”), East Indian and African, representing all three points of the Uganda population triangle, along with some British-trained and -backed Ugandan soldier named Adi Amin—all played roles in the new decolonizing world a’borning.

“An aspect of independence I found amusing,” he memoirs, “was the way the former colonial powers, Britain, France, and Belgium, were falling over backward proclaiming their friendship with the emergent democracies. They promised aid, partnership, everything under the sun to help Africa catch up to the West. They even professed admiration for Africa’s proclaimed neutrality between East and West, as long as they never voted with the East or entered into any economic and military understanding with the West. There was nothing they wouldn’t do for Africa as long as Africa continued getting aid to buy Western military gear and train soldiers in Western military schools. Friends, we are your friends; we will help you catch up to us.”

One of the ways this worked, this reviewer surmises, is to help the new nations develop their colonial letters. So Thiong’o writes about his participation in the 1962 Conference of African Writers of English Expression, held at Makerere. He even got a chance to take Langston Hughes—a man soon to be known for his assistance in getting African writers published in America—on a tour of Kampala. Too bad the conference, as Thiong’o found out four years later, was funded by a front group funded by the Central Intelligence Agency.

So the times shook the historical leaves. “Looming over the joy of decolonization was the chaos of the Congo—[Patrice] Lumumba’s assassination, the death of Dag Hammarskjöld, and the rise of Joseph Mobutu to power” in Zaire, the renamed and de-colonized Congo. “Mobutu’s ascent is often depicted as the result not of Belgian colonial history and Cold War geopolitics but rather of interethnic and interregional strife. People seemed to forget the fact that all his life Mobutu had worked for the Belgian army. A few months before independence, the Belgian authorities he had served so well had promoted him to colonel—a kind of parting gift—or was it an insurance policy? We ignored the significance of Mobutu’s taking the name Leopard to echo Leopold,” the Belgian king who oversaw the Congo’s rape of land, minerals and people.

Is it unfair at this point to demand more from Thiong’o? It absolutely is and, now admitted, it is also beside the point. Vol. 4 is necessary to complete the decolonization process begun here. Hopefully, he will ensure that future memoir—which must herald his leap into insider-oriented deconstructing and societal sacrilege—will not only match the geo-cultural politics of the moment displayed in Vol. 3, but what he has done for all of the trio—charting the beginning and end of a singular story within an extraordinary life, well-told and one at a time.

Todd Steven Burroughs, Ph.D., is an independent researcher and writer based in Newark, N.J. He recently completed a draft of Talking Drums and Raised Fists: Mumia Abu-Jamal, A Biography of a Voice and is working on a second Abu-Jamal book, a biographical anthology. He is the author of  Warrior Princess: A People’s Biography of Ida B. Wells, and Marvel’s Black Panther: A Comic Book Biography, From Stan Lee to Ta-Nehisi Coates, both published by Diasporic Africa Press. His 2014 audiobook, Son-Shine On Cracked Sidewalks, deals with the first mayoral election of Ras Baraka, the son of the late activist and writer Amiri Baraka, in Newark. 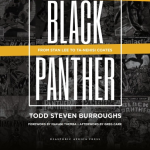 One thought on “Book Review: Words Covered In Ivy, Not Yet In Blood”